Human beings are extraordinary creatures. I say this because, in the 4.5 billion-year-old history of the Earth, no other living organism has come close to what we have been able to achieve as a species. Now, I’m not talking about going into space or creating artificial intelligence; although these are as staggering an achievement as any. As a species, we have done some pretty amazing things at the ecological level as well.

I’m sure you have studied about the food chain and food web in your school. To the uninitiated, the food chain is a representation of how one organism eats another to obtain energy. Here’s an example-

In nature, food chains rarely occur in isolation. We have something more complicated called the food web, which is a collection of food chains. An animal doesn’t feed on one particular organism (can you imagine if you had to live your life eating ONLY potatoes?); it has some variety in its diet. But largely, most organisms can be categorized occupy the same level in a food web. For example, in a food chain of grass-goat-tiger, the tiger is at the third level. It eats herbivores. In every other place in the food web, the tiger either occupies the 3rd or the 4th position only; it eats herbivores. The same goes for almost every other organism in nature: their positions in the food web are more or less fixed.

This is a big place where humans stand out. We have managed to put ourselves in every position of every food web that can occur in nature! We eat plants, we eat herbivores, carnivores, detrivores; it doesn’t matter where they come from, whether they are terrestrial or aquatic! Human beings have transcended the limits of the food web. We have adapted to eating anything (think Bear Grylls).

You must also have read about the various spheres of Earth; the lithosphere (land), the atmosphere (air), the hydrosphere (water) and the biosphere (living things). The place where the land, water, and air interact is a narrow zone where all living things exist. These spheres interact among themselves and make the dynamic Earth.

Till humans came on the scene, no living organism alone was able to bring a significant, measurable interaction with the other spheres of Earth. All living things would collectively interact. But humans have again transcended this barrier. Human activities today has interacted and continues to influence every other sphere of Earth, including the biosphere. So much so, that the literati of the world have introduced a new sphere on Earth; the anthroposphere. 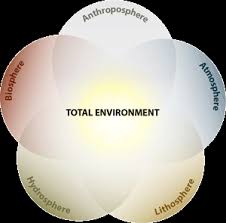 The Earth now has FIVE spheres.

These are just two examples of how humans are extremely dominant on Earth. We can do things that were previously inconceivable. While that is a great thing, we have also misused this fantastic ability of ours. Our interactions in the food webs, our influences on every sphere of Earth has brought about effects that were unprecedented; almost all of them are negative. It is for this reason that the field of Environmental Science came to the fore from the 1970s. We study about the environment to understand it’s dynamics, and more importantly to understand how we impact it.

This understanding is crucial if we are to continue living the way we want to. Our impacts have not been positive and are starting to come back and bite us. The environment is being affected in ways you cannot imagine and I feel like it is my responsibility to educate everyone about it, so we grow a conscience and start acting before it is too late.

One thought on “Humans: Earth’s most dominant species”